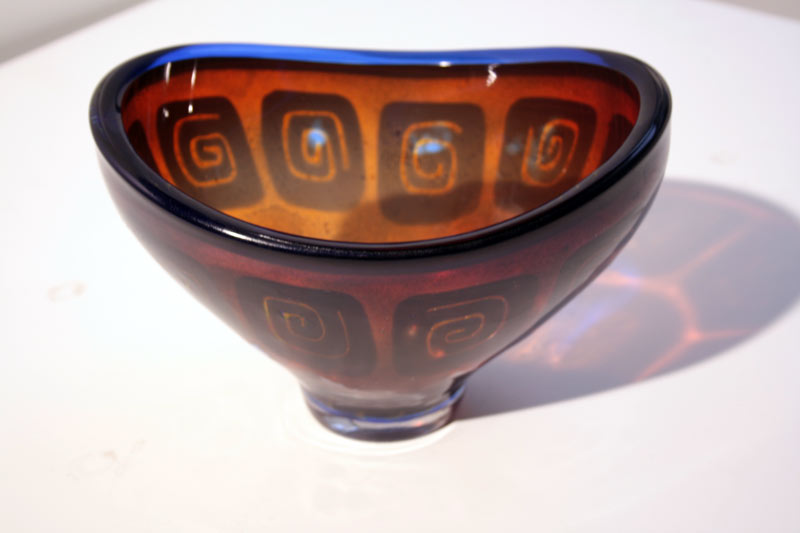 Data: Height 15 cm, width 22cm. Signed; “Orrefors, Sweden, Ravenna Nr 166 Sven Palmqvist. A boat-shaped piece with a decor of what seems a mix of @'s and what we Swedes call "löpande hund"/(leaping dogs?). I believe this is a double Ravenna.

Provenance;  “The @ Ravenna” was bought by the Detroit “Fisher Institute of Art” in 1951 but never arrived. Instead, somehow, it got redirected to “Løfbergs Glas” in the city of Malmo in Sweden. Here it got sold to a gentleman in the public.

The piece. This boat-shape was common among the earliest Ravennas, and itʼs maybe in these early boat-shapes - often with semi-figurative motifs, a clear base, a matching rim and a double layer of glass plates - that the Ravenna reaches itʼs highest level. When I - in my book - talk about the best Ravennas combining technique and artistry to reach world class, this is the sort of object Iʼm referring to. In later Ravennas the colour-powder was often forgotten or seen as an unnecessary nuisance. In the early Ravennas however, the colour-powder was an important ingredient, and this very early Ravenna illustrates this very well. Having the rim in a different colour than the background, particularly in the same colour as the motif, was not unusual for the early Ravennas. We all know that Sven Palmqvist was a great technician - that he allegedly invented Ravenna, Kraka, Fuga, Selena, etc. - but few, if any had realized that, as this piece proves, he was thinking about inventing the internet.