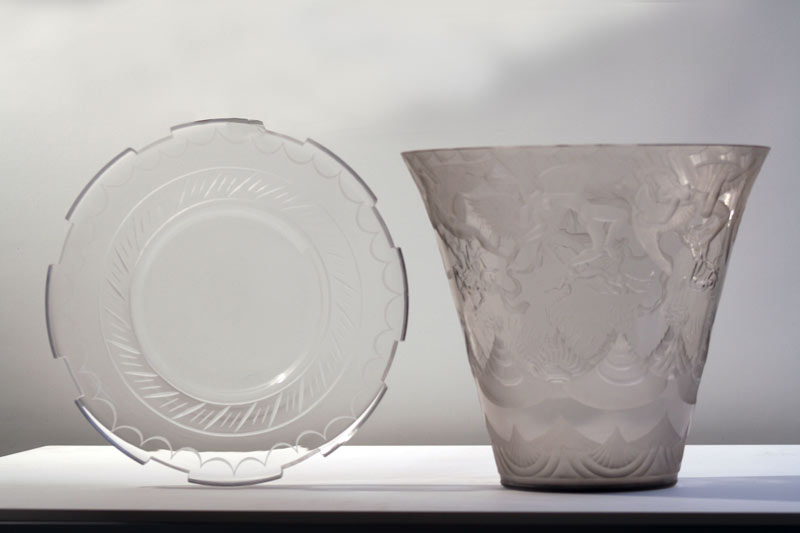 Data: Height; 28.5cm. Diameter; 31cm. Signed; “Orrefors, 1928, S Gate, E.Weidlich No 333”. Also inscribed in the base; “To the right honourable lord mayor of London and the lady mayoress in memory of the Stockholm. Exhibition 1930.” Motif; Erupting forest-clad volcanos, a setting (or possibly rising) sun, angels and creatures falling out of the sky.

Exhibited; The engraving - To the right honourable lord mayor of London and the lady mayoress in memory of the Stockholm Exhibition 1930 - suggests that this piece was exhibited at the 1930 Stockholm Exhibition/"Stockolmsutställningen". There ought to be photos of the piece at the exhibition from then (there are from the Paris exhibition five years earlier). it has, as far as I know, not been exhibited or photographed after this.

Provenance; This piece was purchased at the International and Modern Sales Auction (by Stockholms Auktionsverk) 10-12 of May 1993. A close-up of this piece formed the catalogue cover of this sale. As far as I know, this is the only occasion ever when a modern Swedish art glass piece has been the main attraction of an international sale. Though I do not know for sure, it is my belief that the piece went directly from the heirs of the lord mayor of London (presumably Sir William Neal) to Stockholms Auktionskammare, but I have only unsubstantiated rumours to corroborate this.

The piece. “Heaven and Hell” was designed for the Paris Exhibition in 1925, and it is one of the few main engraved pieces that can actually be identified from the photos from the fair. Other examples of this model can be seen in “Simon Gate, Edward Hald” p 80, “LʼArt d ́écoratif modern en Suede” p 25 and in The Brilliance of Swedish Glass p 212. This piece is, as far as I know, the only example of “Heaven and Hell”, having reached the auction houses. Thus, if it is so, and if one holds Orreforsʼ engraved pieces above the coloured - and "Heaven and Hell" above the “Bacchus Bowl” and “Girls Playing Ball” - then this is arguably the best piece of Swedish glass ever having reached the market. The dish is of later date, and not of a corresponding quality.