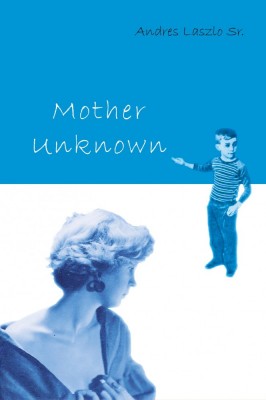 My father wrote three major novels, of which this was the first. The other two - especially My Uncle Jacinto but also Paco Neer Fails - went on to become successful movies and Mother Unknown was about to be turned into a screen adaptation too at my father's demise. However, that never happened, and as I've turned the text into English while adapting it, I have done so with the intention of not only giving the text a proper content editing (something Plaza Janez never did) but also making it more attractive for producers. Much of the action is set in Tangier during World War II. the rest in Naples, Paris & Avila. Read book part.    VIDEO

Tangier during World War Two - less than five minutes from Gibraltar as the rocket flies - a large town or maybe a small city. Whatever it was, it remained outside the war and the world order that so much of Europe was forced to subject itself to, yet not outside the whirlwind of plots that surrounded it. This is the scene on which the curtain rises for act one of my father’s first (and only, yet not filmatized) major novel. Tangier, however, is only the setting that Andres Laszlo Sr.’s has chosen to get this drama started.

Tangier forms the orchestral background against which the first part of this tumultuous story is set: A backdrop that plays excellently well against the vigorous figure of Kurt, the protagonist of the story. Kurt’s presence in Tangier during World War II can be best explained as an escape, resonating with Senior’s own escape from the war and his military service (an escape he was imprisoned for). Guided by his fierce desire for independence, Kurt seems destined never to settle down anywhere, and maybe that's the reason why he has never allowed the ivy of affection to entangle his heart. He lives for his art, sculpturing, but only as long as it satisfies him. However, then one day this man - who has sworn never to leave a single track in the snow, or to get subjected to anyone’s will, other than his own and the marble's - suddenly finds that not only has he left such a track, but also that it has caught up with him, and there is no doubt whatsoever as to whether the boy is his.

One night, an anonymous hand leaves a letter and a three- or four-year-old boy at his door. “Lieber Kurt, I’ve sent you your son…” says the letter. Where there should have been a signature, there’s nothing but emptiness, and it’s precisely the silence of this emptiness that prompts this great drama in our protagonist’s life. The man who had sworn off all memories, all scraps of love and affection, finds himself enslaved by the necessity to retrieve a long-forgotten fragment of his past, only he doesn’t know which.

Totally different from his previous works – El Castello de las Focas and La Rapsodia del Cangejo – this novel shows a new side of my Andres Laszlo's personality. This is a side that captivates us with its dynamic descriptions and lively dialogue, and it foreshadows his next two great novels: My Uncle Jacinto and Paco Never Fails that both became movies. This book too was about to be turned into a film at his/my father’s demise. The boy, by the way, is a carbon copy of myself (Andres Laszlo Jr.), which is kind of spooky as I wasn’t born until long after this text was first published. Also, my thoughts – for better or for worse – have been allowed to influence this translation, making it “an adaptation.”