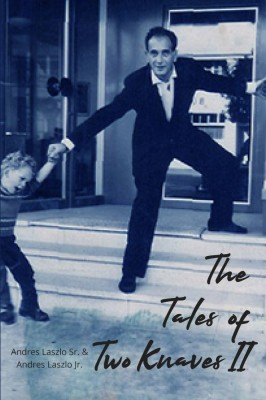 Laszlo & Laszlo Chronicles I is collected/adapted from three sources. 1. Some are taken from my yet to be published adventure-series The Caspian Connection, 2. A few are taken from my book on drug policy: The Drug Problem & 3. Some are new creations. You will find that I have led an adventurous and - at least when I did not appear to be on my way to become tiger-snack, or executed by General Noriega's narcotraffickers - quite entertaining life. Some of these stories read like treatments/scenarios, something that should make them interesting to producers. Read book part.    VIDEO

As I started to adapt my father’s short stories - while, turning them into English - I soon got to the point where I started to think: "Why don’t I come up with 20 or so short stories of my own so as to match his, and to produce The Laszlo & Laszlo Chronicles, covering 100 years?" As I found no reason not to do so, that’s precisely what I did. This is the second part of this book, with all autobiographic stuff removed: just the short stories.

You will find that there are actually two story-tellers: 1) Myself and 2) Chicch Kadune, a tiger, of whom I will be the mouthpiece. I will introduce our stories not only chronologically but also "biographically," something that will force you to get to know myself and Chicch Kadune quite intimately.