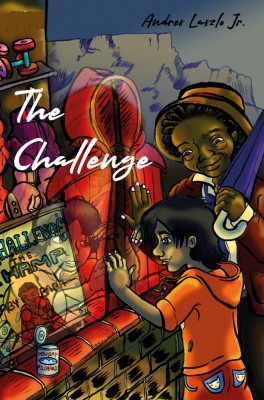 The Challenge is inspired by my father’s (Andres Laszlo Sr.) bestselling My Uncle Jacinto/Mi Tio Jacinto which was also a blockbuster movie (starring Pablito Calvo & Antonio Sica and directed by Ladislao Vajda). About the original story, a prominent Paris newspaper wrote; "Nothing like this has been written since The Little Prince." In my hands: Madrid becomes Cape Town; La Quinta, Mandela Park; 1940s, 2010s; bullfighting, boxing, and 17,000 words, 75,000. However, it very much remains a book for children of all ages. Read book part. Watch the VIDEO.

Though this has been designed for "children of all ages," if the child is very young - as the text sometimes treats of delicate subjects – the story should be read by a grown-up. However, that oughtn’t to be a problem, because my intention has all along been to make the text leveled and as entertaining for the grown-up as for the child. See the 70 illustrations here.

The Challenge is about Baba and his nephew Tiger; it covers a decisive day in their lives. The hero is the bond between the two and the heavy is separation. The setting is Cape Town in South Africa: downtown, Mandela Park Township, Hout Bay and the Old Stadium.

The characters. (i) Baba - a prematurely old, rheumatic, not too bright, drunken used-to-be prodigy boxer with only a bit of imagined honour, a fantastic speed and the upbringing of his nephew left to justify his existence - erroneously gets selected for the champ-part in a ‘Challenge-the-Champ boxing extravaganza’, where old used-to-be champions can be challenged by the public. Baba, confronted by paradox - mainly to prove to his nephew, whom he believes he is looking after, that he is not the down-and-out drunkard that he very well knows everybody tells the boy that he is - accepts. (ii) Tiger- a cuddly, bright, fast and fun-loving eight-year-old who has so far successfully dodged school and who by far is the more street-wise of the two - knows that it’s he who is looking after his uncle.

The beginning. In the township, it rains, and Tiger builds a waterwheel, nearly drowning his sleeping uncle. The letter from the boxing promoter arrives but is not taken seriously. Tiger and Baba travel to the town center for their usual scavenging. Collecting cigarette butts, they spot a poster proclaiming Baba to be the champ to be challenged. This can no longer be neglected, and an upset Baba calls in on the promoter to protest but ends up accepting the champ-part. Baba, too proud to accept assistance, pretends he has got the required boxing-gear.

The middle is about the exigencies, tricks and petty crimes by which they try to acquire the money required to rent the money, all while the danger of separation - in the guise of a fake-watch-puller, a musician, a police, a children’s court, a real criminal, a professional hit-man, etc. - gets ever more real. Their day is seen against a background of the whole spectra of Cape Town criminality: from reusing stamps to a million-dollar diamond scam. As a last resort Baba, dishonoring himself, attempts to sell a fake watch with Tiger’s assistance; they are caught. Baba is about to go to jail and Tiger to be sent to a children’s court. Dishonour and separation seem a fact, the gear shop is about to close, and Baba is - amicably and logically enough to convince us - told that he should ‘give the poor kid a chance’: that he’s no good for Tiger.

The end starts as Baba, devastated, is sent off with a warning. Next Tiger wangles out of trouble, soft-talks the gear-renter into giving Baba credit, locates his uncle, and gets him to the clothes shop. Now we follow them, Baba dressed to fight, on the bus to the stadium where Baba nicely deals with the first opponents – he’s still fast. But then he gets carried away by his desire for honor, and he makes the mistake of accepting the challenge of an athlete twice his size who’s sent to kill him; in this challenger, the danger of separation takes its final physical shape. Baba puts up a famous fight, but is, eventually, down, out and made a fool. Baba has lost what justified his existence - his honor – and Tiger has witnessed his ultimate humiliation; Baba hesitantly walks up to take farewell of his crying nephew.

Don’t be silly, of course, it has a happy ending if you chose to read it that way.