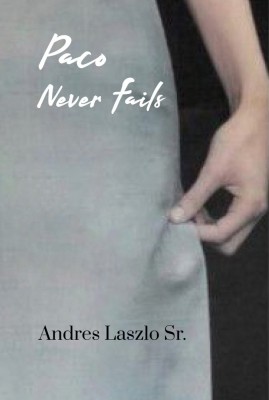 Paco Never Fails is set in Madrid – a place Andres Laszlo Sr. knows and paints well – in the early 1940s (i.e., during World War II just after the end of the Spanish Civil War). Here we meet Paco Garcia who makes his living by mating with young girls from the countryside: girls who have come to Madrid with the purpose of making a better life for themselves as wetnurses and need the milk to keep on flowing. This was at the time a real profession and the “impregnator” most likely to succeed (i.e. "never" fail became the one highest in demand.   VIDEO

Paco sees himself as a serious and professional man, and he is determined to justify the income he is earning from his trade in this 100% decent period drama on a subject matter that would have allowed for a wide variety of alternative approaches. However, "never fails" isn't 100% true because Paco has failed once – he has failed to grant his own wife her greatest wish, which is to become a mother – and this is a main concern. Therefore, when Maria, his wife, unexpectedly becomes pregnant, Paco’s world descends into chaos. Am I really the father? The book was turned into a movie by Didier Haudepin, with Alfredo Landa starring as Paco. As I/Andres Laszlo Jr. was unhappy with the Random House translation, I have made a new. While finishing this new translation from Spanish to English, I have introduced some minor changes. Though I do not remember, I have been told that I have met the actual/real Paco, and whether it is really so or not, to him and a fair part of the inhabitants of Madrid, I dedicate this new translation/adaptation. Read book part.