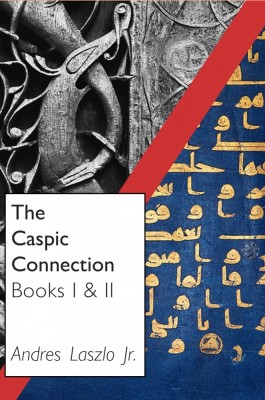 These two first books are thus much about “getting away with exposition” and “planting”. So, if you think my job so far has been ok, I believe that you will find the following (still unwritten) books quite spectacular.

That’s because from now on I/one will be free to mix my scenes and sequels in whatever way I like/reader-suspense suggest because now it’s all “in there” (planted/exposed). Note that at this time the two written books can still have characters and structures added/removed/altered.

All the hard work is done; it’s all in place, and what isn’t, has been left out only because when entered it will augment and create possibilities, rather than be constitute a nuisance. This is a truly huge project.

In these two books, we are following Karli Nobel - Odin's son, though he does not know that - in his adventures on earth. This is simply too big a project to present in its entirety. Actually, it is not until now (mid-September 2019) that the books have been made presentable in English (and Swedish).

This adventure series has back- and hidden stories of complexities comparable to those of The Lord of the Rings.

Tolkien solved this exposition-problem by means of two “big bookends”: The Hobbit as a soft intro, and Silmarillion as caviar for the generals. I took a different approach:

My two first books - The Seventh Lot and A Question of Honour - correspond to Tolkien’s bookends, plus the first book in his trilogy, The Fellowship of the Ring. Then I shook, stirred, and poured it into two books.

These two first books are thus much about “getting away with exposition” and “planting”. So, if you think my job so far has been “ok”, I believe that you will find the following books “quite spectacular”.

That’s because from now on I will be free to mix my scenes and sequels in whatever way I like / reader-preferences suggest because it’s all “in there” (planted/exposed). Also, the two written books can still have their characters and structures altered.

All the hard work is done; it’s all is in place, and what isn’t, has been left out only because it will augment, rather than detract/be problematic.

This is a truly huge project, and I haven't yet figured out how to present it here on my homepage, therefore, let me just try to impress you with a wee bit of backstory on the bad guys: VIDEO

Let's go to Baghdad and 832; there’s a heated argument between those calling themselves “The Kharijites,” and the religious leaders of The Abbasids. Virtually 200 years have gone since the Prophet’s death and maybe 100 years since the original "Addendum" was destroyed. In this argument, The Kharijites argue for the use of unprovoked violence to promote the continued spread of Islam. When the prophet's (and God's) purpose with the original Addendum - which was: no unprovoked war - is used to counter the Kharijites’ argument, these argue that if there ever had been such a thing as an Addendum – which, probably, there hasn't – it most certainly must have been a forgery, produced by A’isha or Uthman, trying to pervert the true spirit of the Koran; "Had the writings been here now, that could easily have been proven." Now a loose-mouthed member of the Abbasids drops a bombshell by spilling the beans: a big silver plate together with six smaller copies, by order of the Prophet, was engraved with the text of (the now destroyed original Addendum), just to make sure that violence never got used in the name of Islam. Also, the loose-mouthed blurts out that these plates are to be revealed to the world on the 200th anniversary of the prophet’s death, i.e., in a matter of days. The Kharijites have to back down, and there is panic in their organization. The leadership of the Abbasids has purposely kept this information from the Kharijites, in order to keep them from stealing/destroying the plates, and the man who has prematurely revealed the information has acted rashly, especially as he has made it possible for the Kharijites to deduce the location of the first and nearest shrine. There could still be time enough for The Kharijites to stop at least the first shrine from opening. The loose-mouthed is admonished, and the Kharijites are warned not to try to prevent the opening of the shrines.

Now, in a Kharijite emergency meeting regarding the upcoming opening of the shrines, no agreement is reached. One group argued that it’s too risky to pursue the “Six and The One”; "They are watching us, and if anything happened to the plates, they would know that it was we who had done it, and we would all be destroyed." However, the radicals argue that the plates must be found and destroyed at any cost. "With them exposed to the world, our cause would be forever lost." There is no agreement but in secret the radical branch of the Kharijites – there’re seventy-seven of them – set off to trace The One and the Six in order to destroy them all, and to kill anyone with knowledge of them. They reach the first location where the shrine’s keepers greet them as brothers in faith. However, after having gotten all the information sought, they slaughter the entire order. As they have found out the next destination (of "Muhammad’s Travellers": those that opened the shrines 200 years ago) they set out for it, and as they reach the second shrine (just about to be opened) the keepers greet them in much the same way as they were greeted at the first, but again they behave as before, and they find out that the next destination of Muhammad's Travellers was Djardjan; they set out for it. In June 832, as they reach Djardjan, it is only to find that the shrine – which had contained four of the five missing plates – has been looted a few days earlier by Karli, a Viking from the Swede’s country (Odin’s son, though Karli doesn’t know this: our protagonist). Some of The Kharijites say it’s time to give up, some even that it must be God’s will; others say it’s their duty to follow the Vikings and destroy the plates, whatever the cost. Anyhow, it seems unlikely that they’ll manage to catch up with the Vikings before they return to their home country: the country of the Swedes. And, following them back to their home would require them to recover the plates from Karli on his own home turf; not an easy task.

There's mayhem and confusion, and it’s decided that a council shall be held. This council reaches no conclusion, and in order to settle the question, it is decided that a poetry challenge shall be held to settle the matter; Handsome Jacob from Spain – who represents those set on pursuing Karl - wins for the radicals. It is decided that Karli indeed must be pursued and that the plates must be destroyed at whatever cost; because, failing, The Kharijites’ very reason for existing would cease to exist. However, as it is unlikely – at least if they all pursue them as a group – that they’ll catch up with the Vikings before they reach the Swede’s country, this idea is discarded. Then the alternative of sending a single man with horses and enough gold and silver to purchase the plates is discussed. However, this is a project – at least if failing to catch up with Karli before he arrives the Swede’s country – that is likely to require more than a man’s power, silver, gold and (quite possibly) lifetime. Alternative solutions are sought and discussed, but no feasible new solution is found. Thus, furnishing their best rider with two horses plus gold and silver enough to buy back the plates is seen as their optimal option. Handsome Jacob - a Spaniard, a convert, the best rider, and the winner of the poetry competition - accepts the job: “Your task is to retrieve/destroy the silver plates at whatever cost.”

At this moment an expert in pre-Islamic magic, the leader of those seven (mainly pre-Islamic) magicians that forms part of The Kharijites 77-strong radical core, suggests: “Here in Djardjan dwells a renowned and powerful jinni by the name of ”Djardja.” If we could make her accept the same challenge as Jacob has just accepted, it would have two thousand years to complete the task rather than half a man-age.” However, it is then argued that a jinni is too awkward and unreliable a creature to deal with, and in addition would be unlikely to be accepted by the Norse. Then the magic experts suggest they offer the renowned jinni food and sex in order to make her accept entering a human’s (i.e., Jacob’s) body, thus to be given a human appearance and a persona that will appear less awkward. The pre-Islamic expert knows the required spells and rituals for keeping the jinni from breaking such a promise and though Jacob protests vehemently, the suggestion is accepted. Now men are sent out to find suitable men as sex-partners for the she-jinni and attractive jinn-food. Once this is done the renowned jinni is conjured up, offered to, admired and given the proposal: “If you “marry into” a human shape (until your task is done) and pursue the Viking-captain called Karli and destroy the five silver plates he has robbed, we’ll give you all the best food money can buy, and all the best humans-for-sex Djardjan can offer. The jinni/Djardja answers shrewdly: “But then, when I have exhausted myself in intercourse and consumed all food and drink my body can manage, what will I do then? If I cannot continue this way of life in the Viking’s country, looking for the silver plates, how then will I be profited?” A new council is held and eventually, it is deemed acceptable that the jinni becomes a long-time/permanent drain on the Kharijites´ resources. (This is a summary of "The Bad Guys" and as the reader won't be told about this in the first two books, I enter it here, for you to read). Read book part.