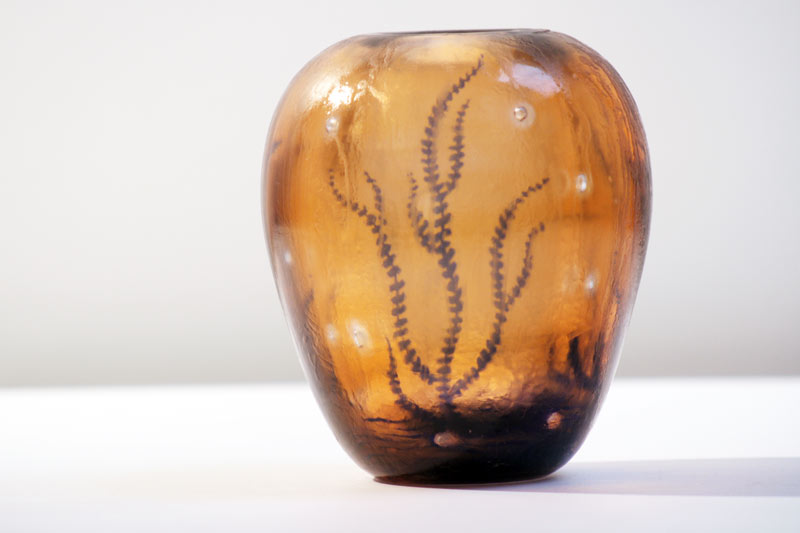 Exhibited; Exhibited; As far as I know, this piece has never been exhibited or photographed. However, it will be depicted in my next book unless it is bought before the publishing thereof, and if the buyer wishes it shall not be depicted.

Provenance; I was second on this piece when it was sold on auction in Gothenburg in the early or mid-1980s (I  never got to see it, or I would have bought it then). Later, as I got to see it, I bought it from the original buyer.

The piece. Hald has designed so many Fishgraals, that when seeing a Graal-piece signed “Hald” and with seaweed “in it”, one more or less automatically assumes “a Fishgraal.” However, this piece is not a Fishgraal. It is a Thick Graal, and though it might well be seen as a predecessor to the Fishgraal... Letʼs take a closer look; [1] Itʼs from the first year of thick Graal making [1937], and technically excellent. [2] The glass is frosted [it has been dipped in acid] which is very unusual. [3] Graal colours varied a lot, true, but orange and lilac/blue... Unheard of! [4] The shape of the vase is, if not unique, yet rather unusual. [5] Hald wasnʼt much given to put air in his Graals; this is a very rare exception, and it could well have been signed "Ariel".