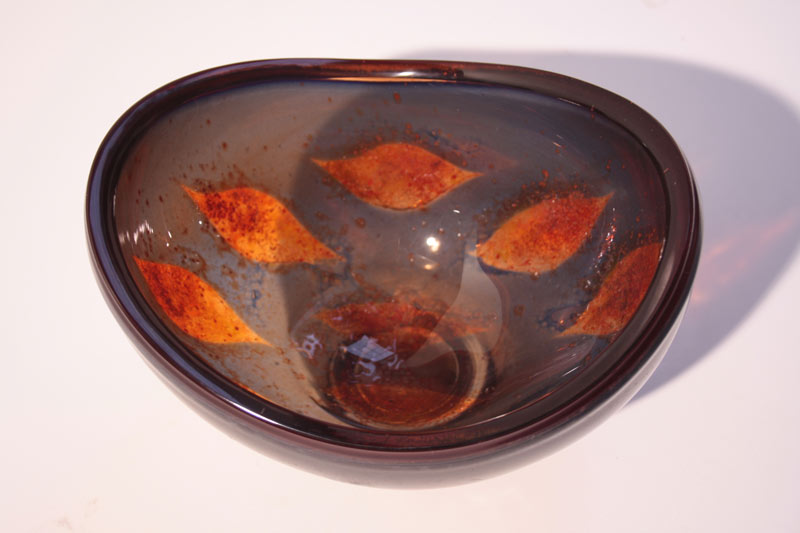 Exhibited; (i) Orrefors Showrooms in Malmo 1985, (ii) In the catalogue "Orrefors Presents The Andres Laszlo Jr. Collection, (iii) Full page photo in “Svenskt Konstglas” 1991, page 94 & (iv) On page 10 in "Svenskt Konstglas" this Ravenna is depicted together with two Ariel pieces as an example of Swedish Crystal at its best.

Provenance; This Ravenna from 1951 was ordered by the Museum of Trondheim [Norway], but somehow it got diverted and ended up in private ownership. It then got inherited and from the heirs I bought it.

The piece. This boat-shape was common among the earliest Ravennas, and itʼs maybe in these early boat-shapes - often with semi-figurative motifs, a clear base, a matching rim and a double layer of glass plates - that the Ravenna reaches itʼs highest level. When I - in my book - talk about the best Ravennas combining technique and artistry to reach world class, this is the sort of object Iʼm referring to. In later Ravennas the colour-powder was often forgotten or seen as an unnecessary nuisance. In the early Ravennas however, the colour-powder was an important ingredient, and this very early Ravenna illustrates this very well. Having the rim in a different colour than the background, particularly in the same colour as the motif, was not unusual for the early Ravennas.