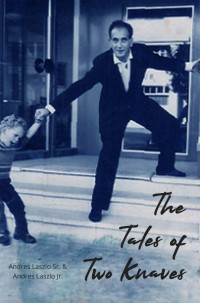 The Laszlo & Laszlo Chronicles are collected from two sources. 1. My father's collection of short stories, first published as Solo el Paisaje Cambia in 1952, and in French 2015: Tout Passe... and 2. Stories out of my own life, several taken from either my yet to be published adventure-series The Caspian Connection or from my book on drug policy: The Drug Problem. The tally comes to 45 stories (22/23) and 233,000 words. You will find that both my father and I have led adventurous and - at least when one did not appear to be on one's way to  starve to death, become tiger-snack, or executed by General Noriega's narcotraffickers - quite entertaining lives. Many of these stories read like treatments/scenarios, something that should make them interesting to producers. The texts have been structured (and Senior’s adapted) so as to provide 100 years of continuity with an introductory biographic paragraph to every story. VIDEO

As I started to adapt my father’s short stories - while, turning them into English - I soon got to the point where I started to think: Why don’t I come up with 20 or so short stories of my own so as to match his, and to produce The Laszlo & Laszlo Chronicles, covering 100 years? As I found no reason not to do so, that’s precisely what I did. The Chronicles are available also in French and Spanish, and presumably soon also in Swedish.

You will find that there are actually three story-tellers: 1) My father, whom I have translated and adapted, 2.) Myself, with my own stories and 3) Chicch Kadune, a tiger, of whom I will be the mouthpiece. I will introduce our stories not only chronologically but also "biographically," something that will force you to get to know Senior, myself and Chicch Kadune quite intimately.

As to Senior’s tales, I do not know how true they are to reality – I met him only twenty or so times after the age of six – but there are no doubts that he had an adventurous life and that most of his stories are at least inspired by true events. As to my, they are mainly pretty true, even though I admit not to know what went on inside the mind of the tiger. When I occasionally have manipulated Senior’s texts, I have done so with no other intention than to make them: (i) More entertaining, (ii) Better suited to contemporary readers and (iii) More attractive for producers. Below you will find an introduction to my own life as an adventurer, as well as two short stories: one by me and one by Senior.