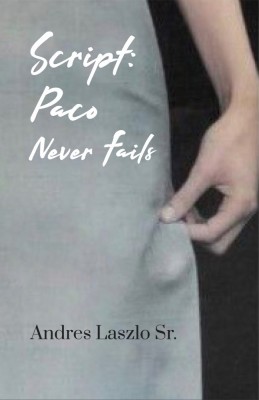 Whereas the original book-text of Paco Never Fails emphasized the anthropological aspect and was a history-drama, the movie focused on (a strong, dark) the comedy aspect. The original (book) text came with crime-undertones, and one can feel how Senior was considering adding a murder-mystery dimension (a genre that was not as popular at the time as it is today). Even though some new producer(s) have been trying to buy the adaptation rights (and this could very well be on the cards), I have started (still early days) to re-adapt the original text into the murder mystery it originally nearly became, and I have some thoughts about setting the action in Mumbai or Goa; not because I spend the winters there but because it (esp. "Portuguese" Goa) would make a much better background than, as in the original, Madrid.

Paco Never Fails is originally set in Madrid in the early 1940s, just after the end of the Spanish Civil War. Here we meet Paco Garcia who makes his living by mating with young girls from the countryside: girls who have come to Madrid to make better lives for themselves as wet-nurses (after unwanted pregnancies) and sooner or later need to boost the milk flow. Though this impregnation is an occupation that seldom gets talked about, at the time (allegedly, it still is) it was a very real profession, and the impregnator most likely to succeed i.e. ‘who never failed,’ was the one highest in demand. However, Paco has failed once, so when his wife finally becomes pregnant, this father of thousands realizes… This impregnation was an occupation also in India, and since I stay in and around Mumbai (mainly in Goa that with its Portuguese influence probably is a better setting than Mumbai to make the story more dramatic, contrasting and believable)... I would like to develop/adapt a Goa-script for Bollywood, and I need expert assistance both anthropologically (for reality-check), and for "Bollywood style dramatization".